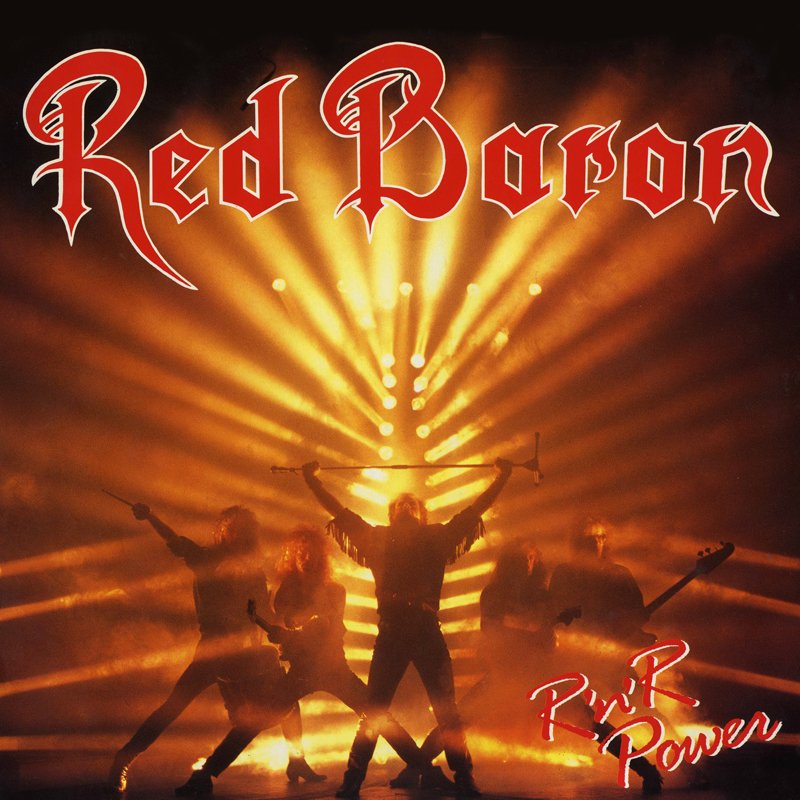 After a couple of weeks a bond developed among the four young musicians and it was decided that this was now a band. Singer Lars Axelsson joined the ranks in late summer and things were moving along nicely. Inspired by the success of NWOBHM bands like Def Leppard and Iron Maiden and heroes as Rainbow, UFO, AC/DC, Thin Lizzy, Scorpions and Van Halen the band set off to work. Two new albums that provided smoking hot inspiration that summer were Accept's Breaker and Y&T´s Earthshaker.

But the band had to have a name and this wasn't easily agreed upon. Eventually Eero found the name Red Baron in an American antiques magazine(!) and thought it was good, because it had a colour in it. The rest of the band went a long with it until something better came up (nothing did) as the band were about to make it's debut at the Heavy Metal Heaven festival along with Trilogy, Stitch, Heavy Load and Attack in November 1981. The festival was the first of it's kind in Sweden and was arranged by radio Heavy Metal Heaven, a local radio show that featured soon to be rock-journalists Anders Tengner and Bengt Grönkvist (who swore he would eat his hat if Red Baron didn't get signed!). As a warm-up the Baron boys played an insanely packed Café Apromus in Solna, Stockholm on November 2nd in front of a maniacally head-banging, metal starved crowd. The Red Baron had taken off.

In 1982 Red Baron parted company with drummer Michael Green and were joined by Kjell Nilsson. The band went into Stockholm Recording Studios for what should have been their debut single for local punk label Rosa Honung (Pink Honey) Records . The two self-penned tracks recorded were Friday Night (which stayed in the live set for many years re-titled Foxy Ladies and later Like Magic) and One Way Love. A photo shoot for the cover took place but after that things came to a halt. The band and Rosa Honung had different views (let´s leave it at that) on how things should proceed. The next months were spent gigging at youth centers, festivals and clubs.

The summer of 1982 saw the departure of Lars and Kjell. After having been cut down to a three piece, autumn finally saw the arrival a new singer: Mats Melin. Having also played with different drummers without succeeding in finding the right person for the position the Baron's realised what was missing. Soon after the arrival of Mats Melin, Michael Green accepted the invitation to rejoin the band. The real Red Baron line-up was complete.

After having spent two months refurbishing an old cold-store warehouse into a their own 24-hour rehearsal studio, a new self-produced four track demo was recorded with Marcel Jacob (Yngwie Malmsteen's Rising Force, Power, Talisman (R.I.P)) assisting behind the mixing-desk. Tracks cut were the newly written Bad Moon Rising, Jungle Fever, Put Your Lipstick On My Dipstick and Rock Hard, Roll On. The demo raised the Red Baron profile as many metal-fans discovered the "new" band.

Early 1983 saw the recording of new demo on the recently acquired TEAC 4-track cassette studio recorder. I Am The Night, a newly-written song about a young soldier forced to serve in a war were recorded along with new improved versions of Bad Moon Rising, Rock Hard, Roll On and Jungle Fever. The demo helped build the fan-base as young metal-fans traded tapes like crazy. The rest of the year were spent playing gigs practically everywhere and anywhere.

1984 saw the band growing better and more popular than ever, A live video was recorded in January by friend Michael "Basil" Uppman (Yngwie Malmsteen's Rising Force) in front of a sold out Club Studion in Stockholm. Several new tracks were featured: No Time For Love, Where Eagles Fly, Rolling Dice as well as the band's earliest song: Faster Than The Speed Of Life. Being impressed with the band's qualities Red Baron were approached by Ulf Beijerstrand, CEO of The Record Company, to recorded a new demo for a forthcoming debut album. Once more, the location was Stockholm Recording Studios and during two days in March three tracks were recorded and mixed: The recently written Rolling Dice along with new versions of Hell On High Heels and Bad Moon Rising. The band's hopes were once again crushed as Beijerstrand in the end wouldn't commit to the project.

But once again The Baron gathered it's powers and stroke back. With DJ Magnus Thomé behind the mixing-desk a new demo was cut featuring two new tracks. Love In The Fast Lane, a new type of song for the band which for the first time featured an acoustic 12-string guitar played by Henrik. Another first was the use of a gated snare drum sound inspired by the drum-sound of Def Leppard's Pyromania album. The other song was Let Me Go (later renamed Let Me Rock), an double bass-drum anthem that went down particularly well with the Mötley Crüe, Accept and Twisted Sister crazed teenage fans.

1985 was to become the best year in Baron history so far. The Band was getting immensly popular and played several Heavy Metal festivals in Sweden. It was also decided that it was time to recorded a 7" single. Up and coming producer Göran Ernlund (brother of Treat singer Robert Ernlund) had worked with the Baron Boys on two new demo tracks: Mad, Mad, Mad and Rock The Highway at DLX Music in Stockholm and the results were very satisfying. It was decided that Göran would produce and that the recording and mixing would take place at CTR Studios in Saltsjöbaden, South of Stockholm in July. Not being totally happy with the mix Göran brought the tapes to Park Studios (now called Psykbunkern and owned by Swedish mega rock band Kent) in Älvsjö and nailed the final mix that Red Baron approved.

In August 2005 the double A-side single Rock The Highway/Fools Gold hit the record store shelves (that's the way it worked in those days) in a handnumbered limited edition of 500 copies in clear red vinyl. They quickly sold out and brought the attention of Warner Music (then WEA) producer Peter O. Ekberg. He really liked the band and a new demo was recorded featuring what was to become the signature Red Baron song: Strike a Bad Patch, a new version of Mad, Mad, Mad was also recorded at these sessions which took place at the legendary Atlantis Studio (ABBA, Europe, Opeth...) in Stockholm.

As usual in the Red Baron story things would not go all well as Peter decided to leave Warner Music shortly after. He was replaced by 70's Swedish pop star Harpo (Moviestar being his biggest international hit) who didn't pay much attention to heavy metal.

So, what to do? After much discussion the Baron Boys decided to go directly to the CEO of Warner Music. Hans Englund actually liked the band and offered them a distribution deal. Soon after contracts were signed and finally the band had their big label deal.

The fall of 1985 saw the band headline the Heavy Metal Festival at Medborgarhuset Movie Theatre in Upplands-Väsby North of Stockholm. Upplands-Väsby was in many ways the metal capitol of Sweden since it was here initial success was brought to bands like Force/Europe, Universe, Candlemass and Yngwie Malmsteen's Rising Force. It was also the place where Red Baron's Mats Jonason grew up playing in different bands with future Europe members Joey Tempest., John Levén and Mic Michaeli. But in the fall 1985 Red Baron owned Upplands-Väsby. The band were welcomed like returning heroes. The fans went totally nuts and just couldn't get enough. Red Baron put on a spectacular show with a humongous amount of pyrotechnics, UV-lights and confetti canons spraying the first 20 rows of the audience. All thanks to "sixth member" Benny "Thunder & Lighting" Lagerhult. Things were looking great.

In early 1986 recordings for the R'n'R Power album started at Stockholm Recording Studio in Södermalm, Stockholm. Engineering and mixing were handled by Per Blom (who also worked on John Norums debut and Candlemass Nightfall album). After Red Baron had laid down all backing tracks guitarist Henrik Larsson decided to leave the band for personal reasons. This set things back for quite a while since the search for a new rhythm guitar player would prove to be a long and hard one.

Having upgraded their rehearsel studio to a semi-professional 12-track recording facility in the summer 1986 the four remaining Barons kept on working and recording new material. One track that stuck out was Shake Your Radio. An uptempo party rocker based on a glam rock beat with a catchy sing-along chorus. The track was presented to Warner Music as a potential single for the already planned second album.

After many audtions Jan Peterson finally stepped in to the Barons rehearsel bunker and the band was once more complete. Being a huge AC/DC and Def Leppard fan he brought a party vibe to the band which was very welcomed. Apart from being an excellent rock'n roll guitar player he also played some piano and had a baritone voice which complemented Mats & Mats tenor voices nicely.

Things were picking up again and the final vocal and mixing sessions for R'n'R Power went well. Friends of the band showed up to add some backing vocals. Pontus Norberg (Hammerfall, Poodles, Great King Rat) lent his voice to Fool's Gold and Strike A Bad Patch while Mikael Nord Andersson (who later produced The Scorpions, amongst others) laid down some harmony vocals on the Nazareth cover Razamanaz.

R'n'R Power was released in spring of 1987 and the track Rock'n Roll Power was picked as the radio single. It was a local Stockholm radio hit but didn't make it on national radio. So, it was time the hit the road and promote the album. Red Baron signed to Sweden's second biggest booker/management at the time,  Showringen. This also meant that the hard rocking Barons would be booked to open for such an act as Eldkvarn. They were veteran rockers coming out of the sixities hippy era with a Bob Dylan-esque style that obviously didn't match with the young headbanging Heavy Metal Rockers. Oh, well...

The fall of 1987 and early 1988 saw the band working hard on material for the next album which had the working title of Tricolor. Anthems like live favourite One For All, All For One, Don't Stop the Show and Shoot, Shoot, Bang, Bang were recorded and there was even a ballad! The band never cared much for ballads but realised that it was probably necessesary to have one. Mats J. had played around with a classical sounding piece for a couple of years that sounded real good and it was decided to give it a go. It was given the full power ballad treatment and the title White Wings. The lyrics celebrated the importance of freedom.

In the spring of 1988 lead vocalist Mats Melin dropped the bomb! He had decided to quit the band and the music business and focus on a civil career. He offered to stay on until a new lead vocalist had been found. Several replacements were auditioned but none of them had the powerful voice that the band felt was necessary. And so in May 1988 Eero Koivisto also left the band and Red Baron was no more. 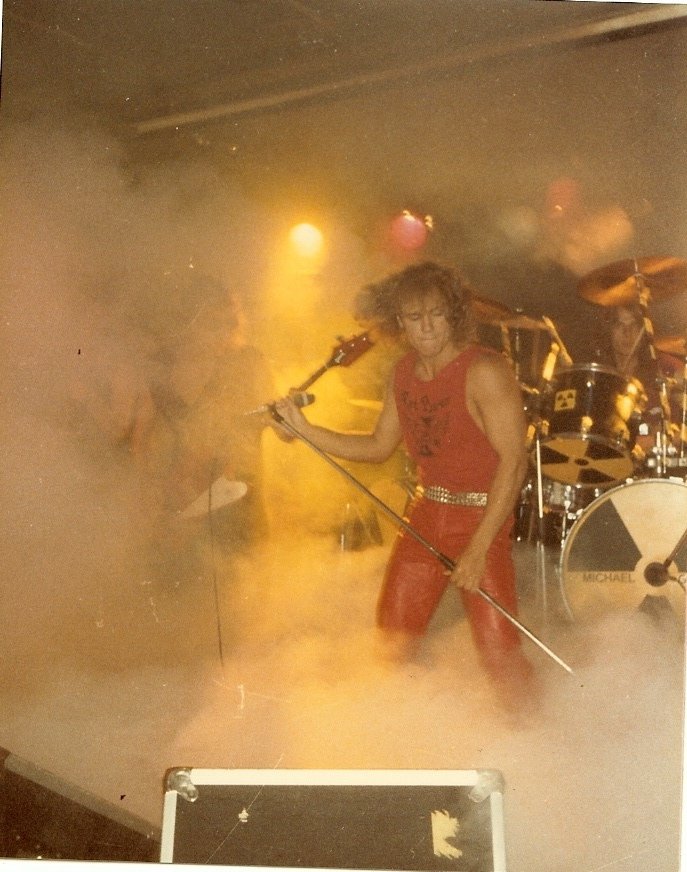